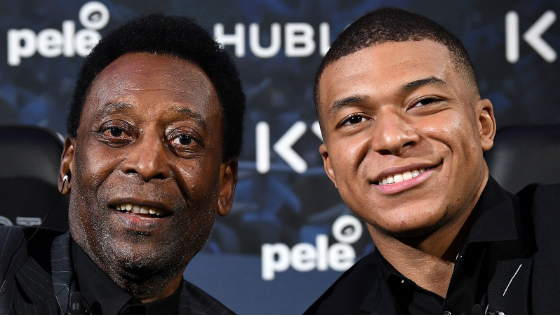 Mbappe wishes Pele a speedy recovery and receives a thank-you note from Pele, who is overjoyed that Mbappe broke his FIFA World Cup record in Qatar.

Pele, a Brazil football legend and three-time champion, is currently down with a respiratory infection. He is simultaneously fighting cancer and undergoing chemotherapy. The France striker, Mbappe, lost no time in sending his prayers to Pele for a quick recovery.

Mbappe took to Twitter, writing Pray for the King Pele.

The king himself responded to his prayers with a thank-you note, adding that he was pleased with Mbappe breaking his record in the FIFA World Cup 2022 at the age of 24.

Kylian Mbappe has surpassed this number with a clear margin of goals. He is 23 years old with a total of 9 goals to his name. Five of those goals came in the current edition, while the remaining four goals were scored in the earlier version of the international tournament. Mbappe took the number nine jersey while also becoming the FIFA World Cup 2022’s leading goal scorer.

He is presently in the first place, and Saka, who has scored three goals, is in second. If France advances to the quarterfinals on December 11, 2022, at 12:30 a.m. IST, Mbappe will have more opportunities to raise the bar for players in the future. In fact, even a single goal before being eliminated against England will suffice for his team. However, experts predicted that this match will go in favour of France and Mbappe could hi2 goals,

Mbappe scored two goals against Poland in the second part of the Round of 16 game. Giroud deserves credit for assisting the striker in finding the net securely.

Pele is currently undergoing treatment and is expected to be released soon. Albert Einstein Hospital has released a statement saying that Pele is stable with no new complications. Fans took over the stadium with banners and flags to show their support for the legend while also wishing him a speedy recovery.

The 83-year-old has been in the hospital for over a week. Pele should be out of the hospital soon to see how his fans are still cherishing the special moments he gave them while he was on the field.

The Top Augmented Reality Games to Play On Your Mobile Phone